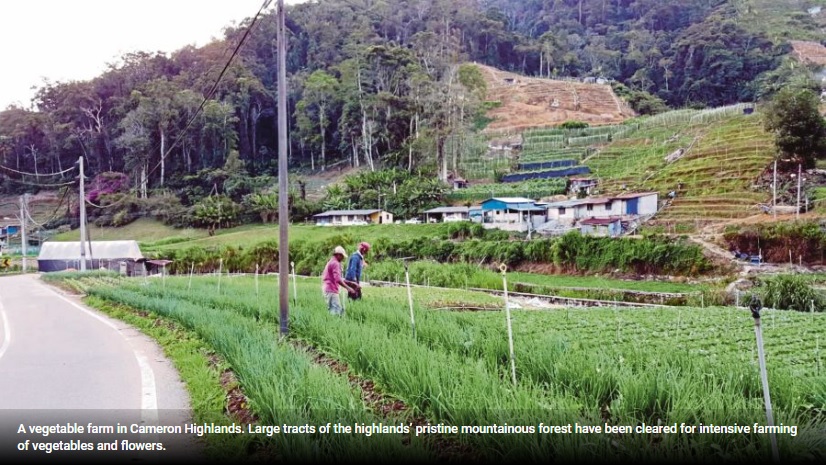 IN former British colonies such as India, Kenya, Malaysia and Sri Lanka, it is quite common to find so-called “hill stations” in the mountains established by the colonialists looking for a cool escape from the steamy temperatures and humidity of the tropical lowlands.

In 1885, a young geologist and explorer named William Cameron came across a plateau during a mapping expedition in the dense jungle of Banjaran Titiwangsa in Pahang. His name would go on to be associated with the area — the Cameron Highlands — where a hill station established by the British offered weekend respite to the colonial civil servants, planters and miners. Many of the quaint English-style bungalows and cottages remain in the district to this day.

In that same era, Sir Hugh Low, the British Resident of Perak, envisioned in Cameron Highlands the development of a “sanatorium, health resort and open farmland”. But, it remained untouched until the early 1920s, with the setting up of an Agricultural Experiment Station, and land opened up for the cultivation of tea, fruits and vegetables. Since then, unfortunately, some development in this area has gone on with too little care and forethought.

Cameron Highlands is a unique ecosystem, home to about 700 species of plants, many of them rare. With about 75 per cent of the district 1,000 metres above sea level, the mean annual temperature is 18°C with pleasant day temperatures in the low 20s. The vegetation changes as one ascends the mountain and its woodlands form the prevailing natural ecosystem within and around the prefecture.

Besides its flora, the region is also the habitat for a wide variety of animals, birds, reptiles and insects. Of these, the Sumatran serow, mountain peacock-pheasant and Malayan whistling-thrush are listed in the IUCN Red List of Threatened Species.

The Camerons district is drained by three river systems with 123 tributaries. Their high points serve as the water catchment for the Pahang and Perak rivers. The environmental wellbeing of the district is critical to inhabitants of the surrounding areas.

Overall, much of the Camerons is still forested (estimated at 71 per cent). Jungle trails lead visitors to tranquil spots, waterfalls and aboriginal villages. And developments of the past have brought economic benefits. But to visitors today, it is obvious that these have been achieved at major environmental expense.

The Camerons offer yet another classic case study of how we grapple badly sometimes with sustainable development. Its rich biodiversity could be a magnet for ecotourism, its cool and pleasant temperate weather could be a big draw for the rest-and-recreation crowd, and its soils could nurture sustainable highland agriculture, providing a unique showcase.

Starting at least 10 years ago, environmental degradation of Cameron Highlands became the focus of often emotional discussions in public and government circles, sometimes involving not only the NGOs, but top political leaders and royalty too.

The problem has been intensive farming with little or no enforcement and control — a problem common to many tropical highlands suitable for crops. Large tracts of the Cameron Highlands’ pristine mountainous forest have been cleared for intensive farming of vegetables and flowers, exposing many people to an increased risk of disaster. Due to uncontrolled illegal deforestation for farming, the use of foreign labour became a necessity. Thus, Cameron Highlands became shrouded in two main issues, namely illegal land clearing and illegal foreign workers.

Among the catastrophes of recent memory are the flash floods and landslides affecting Kampung Raja, Ringlet and Bertam Valley in November 2014, which claimed five lives. The then deputy prime minister, Tan Sri Muhyiddin Yassin declared that this was the direct result of environmental degradation caused by illegal land clearing.

He added that plantations that did not comply with standards of highland agriculture were also one of the causes.

“These activities have resulted in excess water trapped by plastic sheets used to cover the crops,” he said.

“The overflowing water runs into the river, flooding the affected areas. We need to identify the unstable areas facing the risk of collapse and work on an action and mitigation plan,” he had said.

In the Camerons, a post-Armageddon like landscape is there for all to see. And with the year-end monsoon season coming soon, one wonders about the status of the promised action plan to mitigate future disasters.

Sustainable development rests on three pillars: social inclusion, economic advancement and environmental preservation. In Cameron Highlands, the presence of branches of virtually every Malaysian bank and a couple of foreign ones testify to economic progress.

But there is a big question mark whether the authorities have done enough with respect to the third pillar, environmental preservation — the very foundation of our national prosperity and well-being.