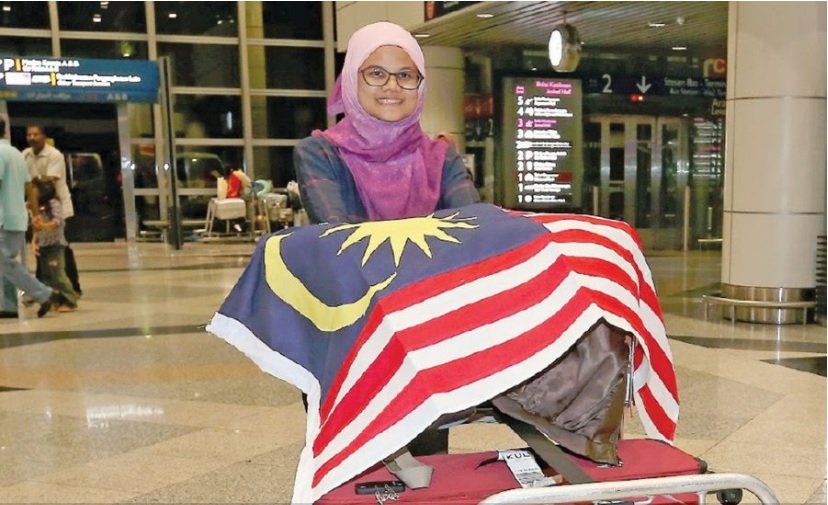 TO earn the title ‘World’s Best Science Communicator’, a young scientist must explain an important science idea in a compelling, easy-to-understand way, and in less than three minutes — a tremendous challenge of World Cup proportions.

So it was with great pride that we learned one of our own had won the top honours at the 2018 FameLab International competition, held this month in the western UK city of Cheltenham.

Dr Siti Khayriyyah Mohd Hanafiah of Universiti Sains Malaysia prevailed over 11 other finalists — from Europe, the Middle East, Africa and Asia — with her description of modern diagnosis of a “hidden killer,” tuberculosis, through the use of antibodies-antigens.

Siti Khayriyyah was the second Malaysian winner in three years. Dr Abhimanyu Veerakumarasivam of Universiti Putra Malaysia won the 2016 competition. And together they have demonstrated to the world the capacity of Malaysians to excel in science and technology.

And what a boost for young scientists as they start careers, not just for the winner but for all those from the 27 participating countries. While only one competitor can win in one sense, all took home valuable experience and contacts.

Malaysia was invited by the British Council to participate in FameLab in 2015 and the Malaysian Industry-Government Group for High Technology (MIGHT) offered to act as its national partner.

It is one of MIGHT’s more recent creative efforts to drive forward our economy through competency in science and technology.

Celebrating its 25th anniversary of service this year, the independent, non-profit MIGHT was created as a public-private partnership to prospect and promote promising technology-related opportunities, and to build consensus on strategically important policies.

The origins of MIGHT actually date back to 1984 when, in his first tenure as prime minister, Tun Dr Mahathir Mohamad appointed his first science adviser, an authoritative voice to augment the counsel of government ministries.

With a mandate to develop science and technology in Malaysia, the first Science Adviser, Tan Sri Dr Omar Abdul Rahman, created a “High Technology Special Unit”, which gradually grew and emerged as MIGHT in 1993.

Since then, MIGHT has realised many achievements, nurturing the growth of strategic, technology-related industries and helping Malaysia edge ever closer to developed nation income and status.

So what are the key tech-related sectors MIGHT prioritised as most promising and valuable for national pursuit? There are several, including:

Creating concrete substance in these priority areas, MIGHT’s early successes included support of the Malaysian Automotive Institute, for example, as well as Formula 1 racing to advance our expertise in auto-related technology.

Opened in 1996, the MIGHT-supported Kulim High-Tech Park was the first development of its kind in Malaysia and now ranks among the best in Asia Pacific.

It offers local and multinational companies a world-class, synergistic space within which to produce high-value products, and boasts 37 industrial and 78 supporting tenants employing a workforce of 28,000. In all, the Kulim High-Tech Park has helped cultivate investments of more than US$11 billion.

Over the years, Malaysia’s development of more than 20 industrial sectors has been charted with the benefit of blueprints and roadmaps produced by MIGHT.

MIGHT’s programmes and activities today also include supporting, for example, Malaysian business competitiveness through our membership in the Global Federation of the Competitiveness Council and the Kyoto Science and Technology Forum. MIGHT is also the secretariat of the Global Science and Innovation Advisory Council (GSIAC) established by the prime minister and comprising leading world figures in academia, business and civil society to advise Malaysia on the role of science and technology in economic development. One of the projects arising from GSIAC’s advice is to find ways to derive additional products and economic benefit from biomass left over from palm oil refineries (MyBiomass).

It is expanding Malaysia’s use of systematic foresight techniques beyond the realms of technology and industrial development. In 2012, MIGHT launched the Malaysian Foresight Institute (MyForesight) to build national capacity to employ these techniques for better decision-making.

Winners of MIGHT’s Global Cleantech Innovation Programme, a collaboration with the UN Industrial Development Organisation and other partners since 2014, give Malaysian entrepreneurs the opportunity to pitch their innovations in Silicon Valley, and access to potential venture funding.

Senior government officials and captains of industry are represented on MIGHT’s board of directors, which I have the honour to chair jointly with Tan Sri Dr Ahmad Tajuddin Ali, a distinguished leader from Malaysia’s corporate world. MIGHT’s talented president and chief executive officer is Datuk Dr Yusoff Sulaiman.

MIGHT’s work has been recognised with many awards over the past quarter century. But the greatest reward of all cannot fit in a trophy case — it is the higher standard of living many Malaysians enjoy today as a result of its farsighted vision and effectiveness.

We therefore wish MIGHT a happy silver anniversary, with thanks from us all.

previous
They're banking on our help
next
Reducing biodiversity loss